11 Ways Sewing is Like Writing and They Both Suck…

Let’s just get this one thing out there: Writing is really hard and sometimes it sucks.

Some time ago, after I lost my will to write, I decided that I should maybe have some other creative outlet to engage in so that, when I wanted to spit on my laptop and instead went to the couch and sat in front of the television to calm down, I could do something to keep my supposedly creative juices…you know, flowing or whatever.

I chose to sew!

That’s right. I did this to myself. I could have chosen something zen. I don’t know…bonsai tree growing. Raking lines in a sand garden? Dance. I could have done interpretive dance. But I decided to sew. Keeping with my desire to never leave the house, I thought sewing my own clothes was a brilliant idea.

As it turns out, sewing is a lot like writing and I’m not sure that it’s helping in the creative juice flow department. At all.

All the ways in which sewing is like writing:

1. You can’t really just jump into it. You have to know a little bit about what you’re doing. If you just jump into it, you’ll come to a part that’s all screwed up because you didn’t know you were supposed to clip seams on a curve, or not start with a dead body if you’re writing a romance. Things that make a lot of sense once you’ve got to that point and made a big mess, but that you didn’t think were important when you started.

2. Not every scrap of fabric, or writing, is really worth saving. It’s okay to dump stuff in the trash.

3. Sometimes, you have to go slow. You can’t always run a seam through the machine like a wild woman, or type without thinking for an hour. Because when you do that, you might end up with something really, really wonky and then you’ll be pissed off that you have to rip it all out and start again. Sewing, and writing, should be enjoyable. It’s not a race.

4. There’s a sequence to follow that will make things go together really well, if you’d just follow it. Stay stitch the neckline, shoulder seam, neckband, shoulder seam, sleeve, etc. Or, a bit of outline, a bit of writing, determine your theme, decide what your main character wants and why he can’t get it, back to the outline, a bit of writing, check goals, etc. The best thing is, once you get the hang of your sequence, the next time you make something new, it’ll be easier.

5. No matter how much practice you get, you will probably spend twice as much time fixing something you’ve made a mess of than you spent making the mess of it. And you’ll wish you could just do it right the first time. But sometimes, that’s just not possible. Get used to it.

6. You feel compelled to make something, even though each project is a frustrating mess. You’re a masochistic sewer/writer who has deluded herself into believing that one day, it’ll all be worth it. You’ll be a star!

7. You really need to take some time to think about what you’re about to do. Stop! What sort of fabric are you working with here? Why are you rushing into doing the hem/scene that way? Are you sure you don’t want to do it differently? In a way that might turn out better? You need to think…but your chances of doing so are pretty slim. And when you do screw up royally, which you will, stop and think some more. Thinking is good! Thinking is a part of sewing and writing.

8. The results of your efforts at first will be awful–you’re going to produce stuff that you won’t even want to donate to Goodwill. As you get practice, your projects turn out better. But that doesn’t mean that what you end up with is exactly what you’d hoped for at the start–that hardly ever happens. So, no matter what it is you’re creating, it could be okay, it could be fabulous, and it could be a disaster.

9. Sewing, and writing, are extremely frustrating…or they’re easy and fun. You just can’t tell which it’s going to be from day to day.

10. You really need to give up on your dreams of fashion week or best seller lists. You’ll be happier that way. Trust me.

Okay, so, speaking of sewing. Remember last week I said that blue fabric would be a piece of cake to work with. 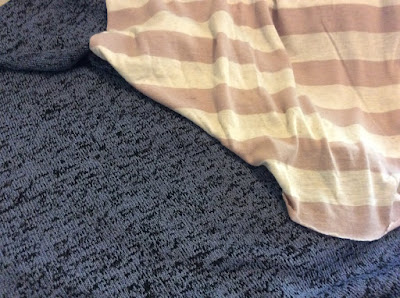 Famous last words. What a mess.

First, the neckline. The first band I made was with the grain and so had no stretch. I cut a new one. Great. I put it in only to find that as I stretched it, the seam curled terribly and the band got smaller and smaller. Naturally it was at its worst in the front where it would be obvious. Fine. I had to take it out and try again.

Not so fast. I could barely see my stitches in that fabric. I gave up on that, cut the neckband off and tried again. This time, I pinned the edges to prevent curling, and made the band slightly bigger and the seam line smaller. Much better! Except in one spot. On the front. I managed to get just a couple of inches of stitching out–a frustrating, nerve wracking hour of work. And I sewed it again.

Never mind, I decided. I will just put something over that area. Fabric flowers or something. It’ll be cute!

My next mistake was in attempting to top stitch the neck band seam allowance down. I used a longer stitch, so it could be seen on the front neckline. You’re supposed to see this top stitching. I thought I was doing a really good job. I used my seam guide foot with the little blade that runs right down a seam so your stitches to the left of it are nice and even.

But in the end, it was a horrific job. Seriously. Ugly as crap and very easy to see. I just had to go and make the stitch length longer, didn’t I?

But because of that, I could see the stitches on the right side so I technically could spend a few hours carefully taking them out. But if I tried to get them out, it would almost certainly ruin the fabric. So…I cut the neck band off again! And wondered what else I could do with this fabric now that it’s been cut into the shape of a front and a back of a shirt. Purse? Meh. Toss it into the trash? Maybe. 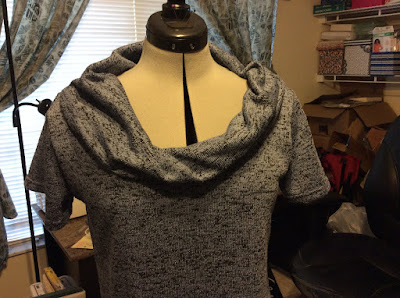 It’s like a twisted cowl, right? It hangs nicely and I tacked it down in a few spots. I guess considering I figured it all out myself without any pattern, it’s pretty good.

Second, the hems at the sleeves and bottom edge. I’ll be damned if I wasn’t watching an online sewing class and the instructor said that the coverstitch should “cover” the bottom edge of the hem. Ohhhhhhhhh! I’ve been doing it wrong. I’ve been folding over the hem, coverstitching, and leaving that raw edge of fabric there, like this: 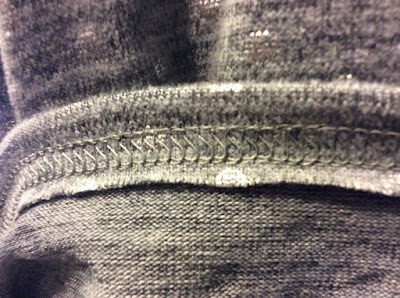 Knits don’t fray and unravel like woven fabrics do, so this works. But, well, I want to do it the right way. Who doesn’t? So I did. I mean…I tried.

After doing those hems, I considered never sewing again. Ever.

I didn’t fuse the hems in place, for one thing, so naturally, the knit fabric slid around and part of the edge was poking out–left unstitched…unbound. I tried to resew those stupid parts only to make a royal mess of my hem. But it’s not really very noticeable if you’re not looking for it. 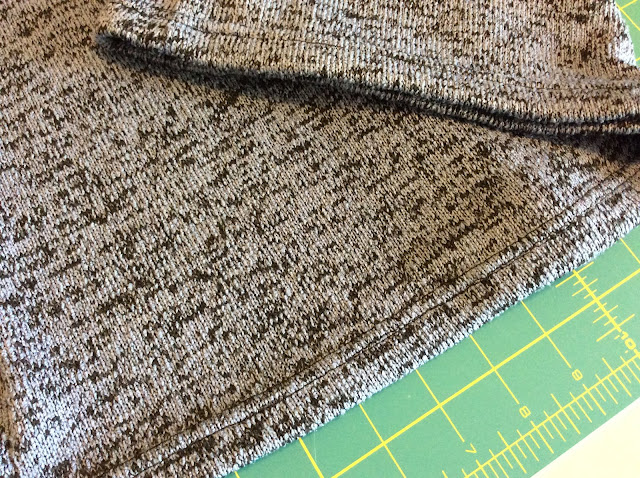 I’m still considering cutting the bottom hem off and doing it again. My way.

The truth is that even if I’d stabilized the hem, the chances of my being able to catch the edge of it in the coverstitch is slim because you coverstitch from the top of the garment. You can’t see the edge of the hem while you’re doing it. So forget that. I’m doing it my way from now on.

11. It’s okay to do it your own way. Screw what everybody else says you’re supposed to do.

So, yeah. I’m having just as much trouble sewing as I am writing. How could I have thought this was a good idea? A way to help my writing?

I find myself suddenly questioning every decision I’ve made in my life. Rethinking everything! (Except the husband and kids. And the cats. And the chocolate. But everything else!)

How are your life choices panning out?

This entry was posted in Rogue Writer, The Sunshine State. Bookmark the permalink.