The North Charleston Marriott is haunted and weird…

I took a little trip last weekend to Charleston to see the eclipse. It was a rather interesting trip. Hubs and I stayed at the North Charleston Marriott where we attended the American Atheists convention. I haven’t been to an atheist convention in god knows how long. (See what I did there?) Before you pee your pants with unanswered questions, let me just get this out of the way.

And then we go home and get back to our regularly scheduled atheist days. 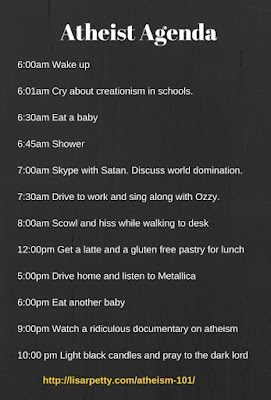 Now that that is out of the way, I want to tell you about the hotel. While the lobby of the North Charleston Marriott is fabulous and filled with textural wonders that I spent some time photographing (I’ll put some more pics in a different post later), and the staff (especially housekeeping, aside from a tp issue) was friendly and helpful, the hotel itself is…well, ridiculous. And haunted (I’ll get to that in a minute).

I don’t know who they got to design the rooms, but they need to stop this person right now. Here is the sink. 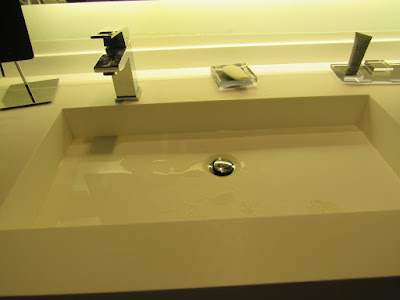 What a marvel of modernity, am I right? But it’s too big for the vanity. It takes up twice the amount of space it ought to. And it’s got 90° angles and doesn’t drain properly on the left side. That means gross stuff that I rinse off my hands is going to linger there in those right-angle corners.

And next to that sink is a mirror. A super magnification mirror. So, whenever you lean over after brushing your teeth to rinse, you get a shocking attack from your magnified face! You might scream and spit toothpaste all over the sink.

The tub isn’t much better. 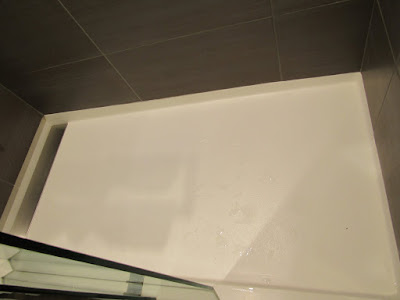 That’s right. The tub is flat. Where the heck is the drain?! It’s that metal bar over there to the left. Sure…it drains. But not completely. It’s just weird.

Now look at these modern, artsy tables next to the bed. 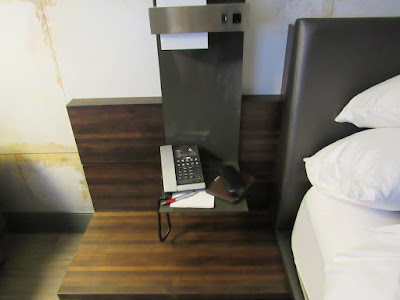 Are you kidding me? What are we supposed to be able to put there? At least they hung these stupid tables over a raised platform so that we could put more stuff by the bed without it having to be on the floor. But still. I call foul.

This is form over function. In a hotel!

Then there’s the issue of the television. It’s at the desk. 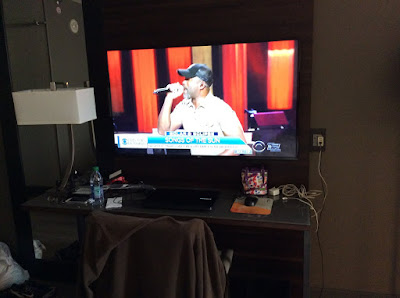 And next to the desk is this bizarre lamp that’s just taking up space that could have been used for a desk so that the television could be free for viewing by everyone in the room without the chance of a head in front of it. 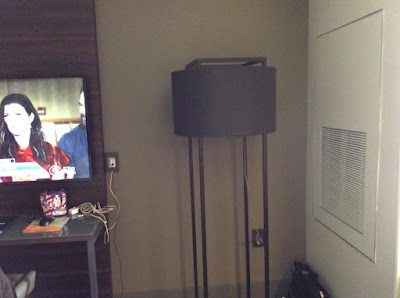 Imagine it! There was plenty of room for a desk, and an unobstructed view of the TV and they didn’t do it!

And you know how hotels have all of their furniture reach the ground, especially the bed, so you don’t lose stuff under it? Not the North Charleston Marriott! 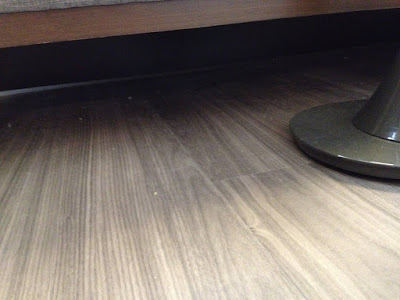 Nope. They want you on your hands and knees before check-out (on a hard floor, no carpet) looking under every piece of furniture for lost coins and such.

The thermostat can’t be adjusted higher than 72°. That’s right. No matter what we did, we could not get the room warmer than 72° short of turning the whole shebang off. And then on again when it got too warm. Then off again. On again. Off again. On. Off. On. Off.

Okay, let’s talk tp. Toilet paper. Here’s the thing. We used to get maid service every day when we stay at hotels. But it’s bothersome. I mean, you feel like you can’t go back up to your room whenever you want because they might be there. And sometimes they are and you have to go away until they’re finished.

So, we go for every other day. And we always leave a tip. So, on the second day, we were at the end of our roll of tp, and I discovered a second roll hidden behind some towels, so I had it set out and ready to go. When we came back to our clean room, I discovered that housekeeping had removed our almost finished roll and put up the new roll. But they did not leave us a second, spare roll! I was like…wtf? What if I need more than one roll for my next couple of days?

You know what I think? I think they were trying to get me to have them come and clean again for more tip. That’s what I think. This is how much toilet paper we had left when we checked out. And, no. It’s not on a tp dispenser because the dispenser is way too low and behind you. I can’t fault the North Charleston Marriott for that. Toilet paper dispensers are notoriously ill placed in hotel rooms across the country. 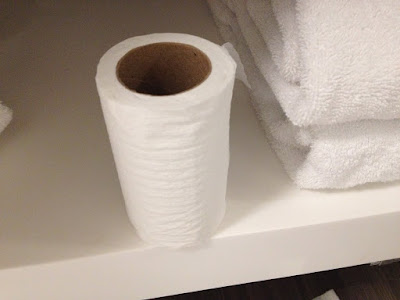 I totally called their bluff. But not really. I got some extra tp at the nearby Walmart just in case. That’s right. I’d rather buy tp than have maid service in my room. (Despite this tp rant, I can really only say wonderful things about the housekeeping and maintenance staff.)

Okay. So, let’s talk about the elevators.

Elevator 3 screams this awful tormented wail as it begins to move and sometimes, I’d hear creepy whispering just before the doors opened! I was freaking out! I tried telling hubs about it but he didn’t believe me! You’re hearing things, he said. But I kept listening. I was certain the elevators were whispering at me!

Finally, we were alone in an elevator and I told him to be really quiet. And sure enough, just as the elevator stopped at our floor, we could barely hear a woman whisper, “Floor three.”

Oh my gawd!!! Why do they do this? It’s the creepiest thing I’ve ever heard in my life.

The whole experience was bizarre. I mean, it’s bad enough you’re not at home and you’re at an atheist convention. But Satanic elevators?!

So, we watched the eclipse. Here’s what we saw.

About half way eclipsed. 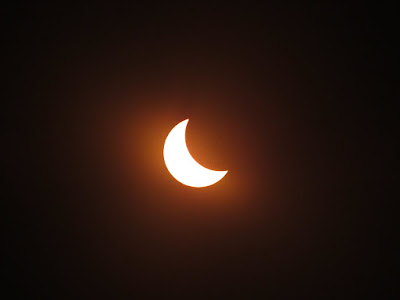 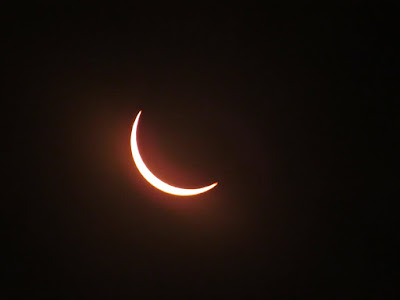 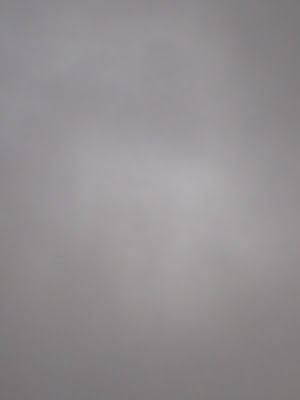 But seriously. The North Charleston Marriott is a pretty cool hotel.