You know how, when you make a decision to do something, you want to get started right away? (Except for when you decide to go on a diet; you always put that off until Monday.) Well, once I decided to go back to working at home, that was it. I started packing up my stuff and over the Thanksgiving weekend, hubs and I moved my office back home. 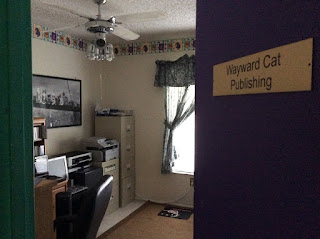 Technically, I’m still renting the suite downtown. I haven’t turned in my keys just yet. I’d like to keep my parking privileges open in case I decide to go downtown to shop for the holidays. But I’m home again.

When I was working at home before, my office was in a spare room filled with spare room stuff. This time, I decided it needed to be just my office…but more than that. I’ve also decided to start sewing again. So, I’m calling it My Creativity Room.

Squeakers loves it. He wants the door open all the time so he can curl up on the brown rug and snooze. A couple of times I lost him and searched the house top to bottom, only to find him curled up on the black chair in my office, invisible to all but the best cat hunters!

I told hubs the other day that we needed to scour every pet adoption center and every SPCA location for a special cat–a cat worthy of Internet fame, so I could take pictures of it and video, and sweep the Tubes with it. And he said, but will these people let you keep coming back to take pictures and video of this cat?

I just don’t understand how a person could not want to live with, say, ten or so cats. Boggles the mind.

Still, I was pretty much joking. I’ve tried to take video of my cats doing interesting things and as soon as I turn on the video function of my ipad and aim it at them, they stop. That’s the most interesting thing my cats do: thwart all my genius get-rich-and-famous-with-cats plans.

And here’s the other cat, doing what he likes to do when I aim a camera at him:

I’m telling you, I’ve got to search around for a quirky cat. A cat that does more cat-like things. No, wait…more un-cat-like things. Nobody cares about the barfing, or the carrying in of half-dead lizards, or leaving off that last bit of poo on the floor outside the box, or the knocking glasses off tables, or the climbing on my desk while I’m trying to work. 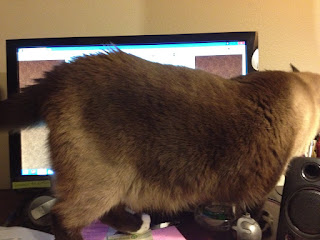 People want cats that can act! Or are just deformed enough to make them cute.
Or maybe not. I think people just like cats.
You know, I created my own imprint for my books: Wayward Cat Publishing. I have a banner for the front of the table when I go to book fairs and it has a picture of our logo on it. And I have a couple of children’s books with cats on the covers. One of them is a zombie cat, but it still counts.
Inevitably, half the people who stop by my table (conservatively) assume all my books are about cats. My best selling books are those kids books with cat pictures on the covers. (After tabling next to Stan Bronstein one year and watching people buy up copies of his kids book Private Eye Cats, hubs said, “You need a book with a cat on the cover.” So I wrote some books about cats so we could put cats on the covers and hubs was right. I should probably listen to him more often.)
This is why I think it’s time I devoted more of my creative energies to cats. And so, I dub 2016 The Year of the Cat. This will be so much better than the Chinese Year of the Monkey. (I’m rather fond of monkeys, chimps, and gorillas. But I do not like orangutans.)
I need to create a list of ways I can celebrate The Year of the Cat.
Let’s see:
1. Take more pictures and videos of my cats and share them with all of my social media acquaintances. (They are so going to love it!)
2. Buy my cats more presents, especially catnip.
3. Sew up some cat costumes and make them wear them around the house! (The cats are going to love that!)
4. Write some more books about cats so I can put cats on the covers. Just give in to the “You write books about cats?” thing. Embrace it.
That’s all I can think of right now. You got any ideas?
This entry was posted in Rogue Writer. Bookmark the permalink.