Much as I like to pretend I attend the Epcot International Food Festival every year, it was more apparent than ever, this year, that I attend a food & wine festival. To put a finer point on it: It’s the Epcot Food, Wine, & Beer Festival.

Drunks all over the place. They wear matching t-shirts so they can find one another in their stupors.

Not only were there plenty of drunks in the park, it was a school holiday. Yay! So, not only were there tired (many sleeping, a few screaming–but can you blame them?) babies and toddlers, the park was arun* with school aged kids in their princess dresses and Star Wars apparel.

It was a gloriously typical day at Disney World: crowded, hot, and buzzing.

I arrived with my handy, annotated printout, ready to eat.

And this year, I brought some plastic storage boxes and wax paper for leftovers.
It didn’t work all that well. The boxes were too large to fit easily into my purse, and of course they had to go in sideways. But I only brought home the leftovers of a chicken sausage with polenta, and some duck. In another box, I brought home a candy and a cheesecake (neither of which looked like their names suggested) to eat at home. I think I’ll skip out on this step next year. Not worth it.
So…what did I eat? Let’s get started.
First stop, Scotland! Yes! I was looking forward to more haggis with neeps and tatties (mashed rutabaga and mashed potatoes). We also got the potato pancake with smoked salmon, the seared scallop with spinach cheddar gratin and the Tipsy Laird, a whiskey soaked cake. Oh, my! It was all scrumptious! 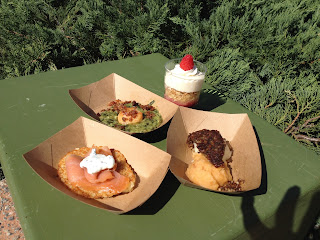 I think that’s my ghostly hand in the bottom right of the picture. Anyway, the description of the haggis this year said “traditional,” but at the booth, it said “vegetarian.” So, I’m thinking I still haven’t had true haggis. It was so yummy, with just a tad bit of liver taste to it. Reminds me of scrapple. Love me some scrapple. The spinach cheddar gratin was so-so–cheesy with a grassy aftertaste; I wouldn’t eat it all by itself, but it paired nicely with the scallop and bacon crumbles.

The smoked salmon was a bit rubbery, but tasty, and the potato pancake was, I’m sorry to say, bland. I make potato pancakes with garlic salt, so that’s the problem. I like a spicy potato.

The Tipsy Laird was fabulous! It was topped with a raspberry and included a bit of raspberry jam at the bottom of the cup. Because Hubs doesn’t like raspberry, I had to eat most of it. I know. Awful. <snark>

After Scotland, I wondered if I was going to be able to eat much of anything else. I did my best!

Next up was Dominican Republic. We had to try the souffle de yuca, topped with “griddle cheese.” We also went with the pescado con coco–seared grouper, pigeon peas and rice, with coconut sauce– and the caramel flan with rum-roasted pineapple.

I had high hopes for this meal because I was reminded of the Puerto Rico booth from last year with its fried plantains and caramel flan with the chocolate crust. Dominican Republic appears to have taken Puerto Rico’s spot this year and it was a great disappointment.

The yuca souffle was akin to unseasoned mashed potatoes. The “griddle cheese” on top of it, which I can only describe as a cheese pancake, was wonderful, however. The pigeon peas and rice tasted like the Spanish rice you can make out of a packet you get at Publix and the grouper, well, it was fish, so…not much to it. 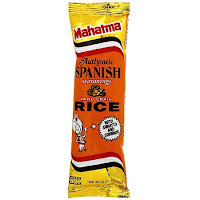 The flan…what can I say. It had a condensed, stringy texture to it, not at all like I remember last year’s treasure. Maybe stringy isn’t the right word…rope-y. Like thick ropes of pudding…soft pasta! That’s it. It was like eating hard bland strips of pudding with a slight pineapple taste. I didn’t like it. So sad.

On to Canada! Oh, Canada! We skipped the filet mignon with invisible (and un-taste-able) truffles a la last year and went for the chicken sausage with creamy polenta and Minus 8 onion jam. 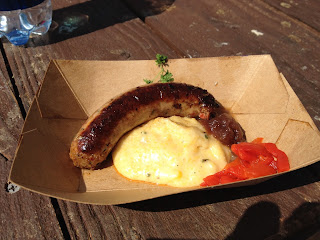 Can you say nom nom? Nom, nom! The sausage was spicy as all get out. Woot! And the creamy polenta was sweet. I tried to eat it all, but I was already starting to get full and I knew I had a lot more to sample. As to the Minus 8 onion jam. Didn’t like that at all. It made me shudder. What the heck was that? Apparently Minus 8 is a brand of vinegars. That explains it. Luckily, this “jam” was off to the side so I didn’t have to eat it.

Next stop, Ireland! Yay. This year we passed on the lobster and seafood fisherman’s pie. It’s hot, and creamy, and not special enough to take up room when there is so much else to eat! But I can’t not have the warm chocolate pudding with Irish Cream liqueur custard. OMG. 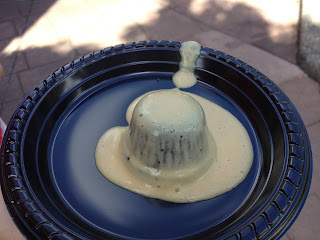 Hubs never eats any–let’s the princess have it all! It is so gloriously delicious. I don’t recall it actually being called “pudding” before and it was much more liquid than I remember it being before, so I wonder if it’s changed. No matter. Still a warm, chocolate, divine hug. Love, love, love.

Thank you, Ireland. I am forever grateful.

Then we did Brazil. We had the escondidinho de carne, also called “Little Hidden One,” a layered meat pie with mashed yucca. (So, shepherd’s pie a la America–with beef instead of lamb.) Note that in Brazil we got yucca, while in Dominican Republic we got yuca. I’m pretty sure they’re the same thing. They certainly tasted the same–as in…not at all. But the meat–almost certainly ground beef–had a bit of spice to it, reminding me of spaghetti sauce, actually.

We also tried the pao de queijo or cheese bread. It was…weird. 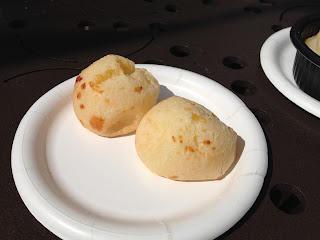 Imagine cheese, a white, mild cheese like parmesan…baked as a bread. You bite into it. The top is fluffy, light and airy, the bottom, gooey cheesy, and the bottom crust…crusty. Bland, vaguely cheese-like.

This is not a Red Lobster Cheddar Bay biscuit. 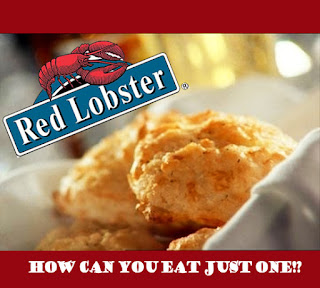 After we went around once or twice, we went back to Brazil to get the cocada, or coconut candy. I was expecting something like…candy. But this is what I got: 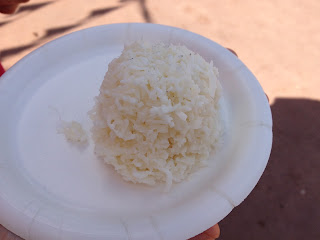 Of course I ate it anyway. 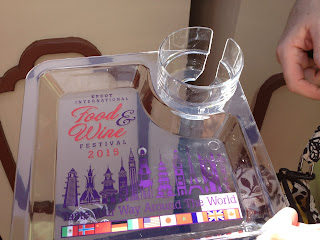 It was about this time that I saw a couple with these trays, designed to hold your food and wine samples. The wife was kind enough to let this stranger take a picture of hers.

Next, China. I wanted to try the duck. I like duck. I had it once before in a Turducken at Christmas some years ago. This duck, alas, was no Turducken. It was “Beijing roasted duck in steamed bun with hoisin sauce.” First, I’m, apparently, not a fan of hoisin sauce. And the duck was not juicy and tender as I’d anticipated. It was a bit dry, and its taste was completely overpowered by the sweet sauce.

The steamed buns in China are just weird. They look shiny and smooth and their texture is doughy. They’re tasteless, at least once you’ve had a bit of hoisin sauce.

We also had the black pepper shrimp with Sichuan noodles. The shrimp, as opposed to being crispy fried in a breading, was doughy with breading. But it was still good. And the noodles? Excellent. Just like the lo mein I get at the local Chinese place. Too bad I couldn’t eat them all. Maybe I’ll get Chinese next weekend to make up for it.

Then we headed to New Zealand to try the venison. I’ve had venison once or twice and thought it was very tasty. But this venison was not. This was “seared venison loin with wild mushroom marsala sauce and kumara dumpling.” 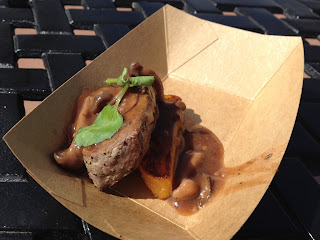 That thing, under and to the right of the dry, tasteless hunk of meat, that looks like a steak fry is the dumpling. Kumara is similar to a sweet potato, a root vegetable. Its dumpling here was bland.

We also tried the lamb meatball, because we never try the lamb, because I claim to not like lamb. But since this outing is supposed to be about trying new things, we tried the lamb. 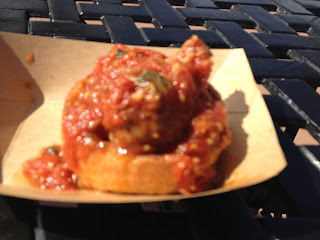 Unfortunately, this was a lamb meatball and so tasted like a meatball. An Italian meatball. I think I got a slight aftertaste of lamb, but it was really hard to tell. It was sitting in a bread cup of some sort. We were way too full to try that. So we pretended it was a shortcake shell for making strawberry shortcakes. Dessert gone wrong.

We stopped off to get a pastel de elote con queso or sweet corn cheesecake, to go, from Mexico. It was in a creme brulee cup and topped with whipped cream, but I smashed it into my plastic storage case anyway. When I got home, the whipped cream had turned to…I don’t know…curdled cream. And the cheese cake tasted like a condensed hard pudding of creamed corn. I didn’t like it. 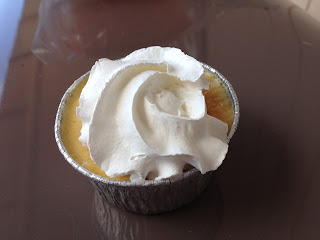 Finally, we asked for some directions and found the Cheese Studio. We intended to try one of their goat cheese offerings. We decided on the Le Bonne Vie goat cheese served with Craisin bread instead of the sweet goat cheese penna cotta, figuring the former would be more…cheese, as opposed to something made with the cheese. 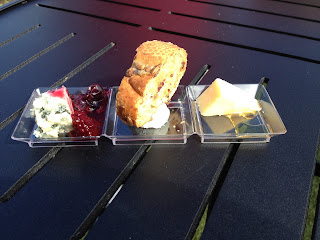 As it turned out, that particular morsel was part of a trio of artisan cheeses. From left to right: Rogue Creamery Oregon Blue Cheese with berry port compote, the aforementioned goat cheese with its impressive hunk of Craisin bread, and Karst cave-aged cheese served with honey.

First things first. Karst is a landscape formed by the dissolution of soluble rocks. It’s also a kind of cheese…I guess. Here is some for sale on the Internet: it says Karst is an American Original cheese. It was very mild, dense, somewhat dry and went well with the honey.

The blue cheese was so incredibly strong I can see why a person would want to mix it up with some sauce a la blue cheese salad dressing. I could only take two small bites. Powerful, moldy cheese it was. The berry compote was sweetly delicious.

And now for the goat cheese. Honestly, I didn’t expect it to be that much different from any other cheese. I was wrong.

That’s all I’m going to say about that.

That was it. That was all I could eat this year. We went on the Gran Fiesta Tour starring the Three Caballeros, as usual.

And, as I whined about last year, Maelstrom is gone! The Frozen ride might be open next year. There was an exhibit in Norway, tying the movie Frozen with that country, showing authentic artifacts and how they were used in the film, probably in an effort to make it okay that they took away Maelstrom, an authentic Nordic adventure, and are replacing it with a fantasy cartoon caricature movie and product tie-in ad.

Hypocritically, I saw this dress in one of the shops and told George that if we had a granddaughter, I’d totally be buying it. He begged to differ. 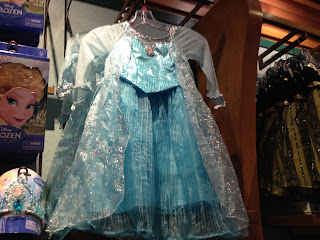 And I took a picture of Thor. 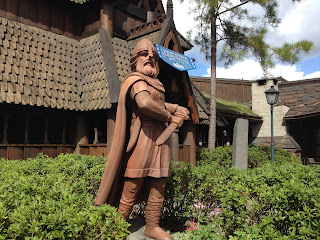 Okay, the last few photos that must be shared!

I tried to take this picture of the Mickey-as-a-chef shrubbery. 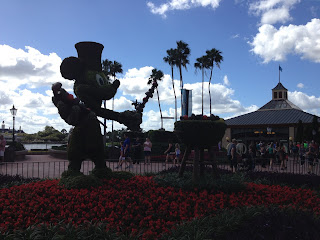 And then I caught some very friendly birds while resting outside one of the bathroom areas. 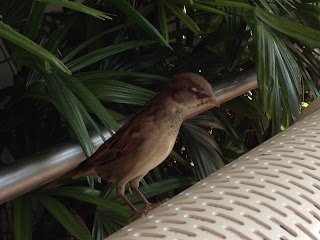 So cute! And then there was this:

The coolest person at the park!

I had a good time, but couldn’t eat very much. Such a shame. Maybe next year.

*I invented that word: arun.

This entry was posted in The Sunshine State. Bookmark the permalink.